Waiting for Saint Brendan and Other Poems

I’m pleased to host one of the poets I “tagged” in the Next Big Thing interview chain letter series, Ken L. Walker. I first met Ken  through fellow poet Katie Byrum when she and I were roommates in an apartment (in Ditmas, between Ocean Parkway and Cortelyou Road) that had no living room, and a neurotic marmalade cat named Fyodor (Scott’s cat). And, the apartment was Dostoevskian (the couch could have stood up and walked out of where it was slouching under the grey window). It was the kind of apartment where a 100 page document for chronic mortgage non-payment was served to our landlord. We were interested to note that the document listed several aliases for him. But, it was alright: we hadn’t paid utilities for several months, nor had been asked to; and the living room had been converted into a bedroom by creation of a wall via pallets, which were then plastered over. When the landlord eventually visited the place when we were about to move out, his triple take was beautiful to behold. 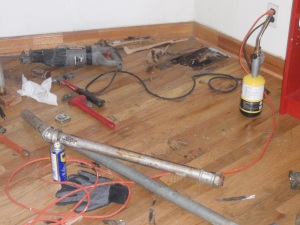 It was the kind of place that, once the snow melted in spring, we discovered discarded pipes in the front yard that unofficial plumbers employed by shady landlord had thrown there after doing a plumbing job on the radiator in my room. (Watching them use rusty chainsaw-like equipment on pipe made me scared for their hands, and brought back Scarface memories.)

Ken L. Walker still carries a Kentucky driver’s license in his wallet even though he has lived in Brooklyn and Queens for the past five years. He sadly completed leading a poetry workshop at the Riker’s Island Correctional Facility. He earned a MFA degree from Brooklyn College and has published criticism and poetry in the Boxcar, the Poetry Project Newsletter, Lumberyard, The Wolf, Crab Orchard Review, La Fovea, Washington Square, Atlas Review, The Seattle Review and The Brooklyn Rail. He produces the conversation project, Cosmot.

1. What is your working title of your book?

(I’ve nearly completed four unpublished manuscripts:  Twenty Glasses of Water, The Letter Home, and The Sight of Constructions, along with a still-in-process work of translation by a 19th century German poet; but, for this interview, I will focus on the primarily-mentioned manuscript.)

2. Where did the idea come from for the book?

I have been translating Spanish, Russian, and (very recently) German and I once talked to a couple of friends about English-to-English translation and realized that I should do an English-to-English translation of my MFA thesis (Red Flag) because, well, it sucked, and that I could raise its stakes by integrating ideologies of violence as filters for the translations—my own violence, sexual violence, the appearance and body of violence, etc. What does that mean; well, I’ve come to attempt to implement an idea I’ve recently brooded about too much—that there is no revision, only different versions. And, thus, a translation poses another version, in this case, within the same language; or, if I translate (update) Christopher Marlowe from hundreds of years ago into the contemporary, that would be a translation, thus another version. Granted, the problematic function of this idea is that I am the same author so translating my own work leaves a level of inauthenticity; but, the oft-abused Benjamin notion of the royal robe’s ample folds holds up here. I’m excited about this idea and attempting to practice it much more than the traditionalist view of straight revision. At least, now, I have two completely different versions of the same core. And, let’s face it, many ideas have turned out to be huge failures, as much as I deeply appreciate them—John Brown, Marxism, transcendentalism, Buckminster Fuller’s leaky domes, the United States of America.

As the violence filter goes, I always think about how people like Karl Marx and Rosa Luxembourg and Malcolm X are portrayed, to a certain degree, as violent figures or violent aspirers but they never actually physically harmed anyone (well, Malcolm X never did after he got out of prison and made the transition from Detroit Red to El Hajj Malik Al Shabazz); however, their ideologies and theorems may have led to violence which was out of their own personal control; as well, perhaps they exuded a personally private violence that not many folks were or are aware of. I have also been thinking a lot lately (due to recent spectacles) about the impossibility of rejecting chauvinistic and sexist violence, as a man, a white man, a straight white man. What can we do about opaqueness, covertness, invisibility, etc?

3. What genre does your book fall under?

4. Which actors would you choose to play your characters in a movie rendition?

5. What is the one-sentence synopsis of your book?

6. Will your book be self-published or represented by an agency?

Hopefully, it will be published by a publisher who believes in its work and I think if the statistic is correct in what it seeks, 96% of working poets do not have agents.

7. How long did it take you to write the first draft of your manuscript?

In total, 5 years; I began constructing my MFA thesis—Red Flag—before attending graduate school at Brooklyn College when I was living in Louisville, Kentucky. Actually, my friend Andrew Porter, while shooting pool one night at the Nachbar, said, “Man, you should write a book of poems about work.” And then that was my MFA thesis and then I began the translation of that manuscript almost a year ago. So, Red Flag began in 2007 in Louisville, Kentucky and became How They Fall/Like That.

8. What other books would you compare this story to within your genre?

Well, I’d have to trail a bit outside of my “genre” and go with:  Zong; full length works and essays by Michael Kimmel; Nathaniel Mackey’s Splay Anthem; Ed Pavlic’s Winners Have Yet to Be Announced; Capital, vols. I and II; anything by Diogenes Laertius (the full history of Cynicism), Kwame Anthony Appiah (rooted cosmopolitanism), Lisa Robertson and Francois LaRuelle.

9. Who or what inspired you to write this book?

10. What else about your book might pique the reader’s interest?

A majority of the poems written in rhythmic syncopation with several Nina Simone pieces, including a remix of “Feeling Good.”

Thanks so much, Ken! In the next couple of days, we will be posting a conversation between Ken and I, raised by several of the points touched on here. Good Stuff! Finally, click here for my own self-interview

An Orthodox man comes out of “Laundry Mania” with a white shirt draped in plastic, freshly-laundered and ready for tomorrow. A thin, young Hassidic man in a brown, furred hat like a lamp shade has his crying daughter firmly clasped in his arms. He’s marching ahead, wheeling a suitcase. It’s the eve of Sabbath, much work still remains to be done before the sun goes down, to prepare for when work must cease. There’s no mitigating circumstances when it comes to the Law. Auburn-wigged young wife walks behind in black, registering the argument in her demeanour, registering the husband’s stress in the downward-looking gaze and gait of her wife’s body.

Seriousness struggles with another kind of vigil: Friday night, and cheesy, sweet Latin American music pipes out of the shops, floating on the air. Clutches of Uzbek men in plastic leather jackets and 70s ‘taches, smoking rancid fags, eye the young women, who shun them with a self-turning shoulder. Some of the men feel like mafia, probably because they’re always around, doing nothing specific. They’ve claimed this pavement; you have to walk around them. Same with the Poles. (Hipsters, beware. Locals Rule here enough to resist gentrification. Ah… but gentrification is like Manifest Destiny. An inevitability in the U.S., and its empire abroad.)

A Mayan boy on the pavement in three-quarter-length khaki shorts is blowing bubbles upward into the Indian Summer evening sky, and I cross into Latin America. Passing the barber shop, Abel the barber from Mexico gets up from his ruminations to greet me: perfect grey flat top like a 50 year old punk, he wears a bone necklace, and has features like Quetzalcoatl. His wife is Irish. “David? si. Yo estaba pensando. el nombre de mi suegro es Mc…Dermott: y es de una ciudad que se llama Leitrim. Si, Leitrim.” (“David? Yes. I was thinking. My father-in-law’s name is Mc…Dermott, and he’s from a city called Leitrim.”) I go up the rickety wooden steps to the subway, laughing to myself and, in fact, some tears of connection squeeze their way out with the laughter: about how only New York, perhaps, can connect the watery fields of Leitrim (otters and loneliness), to Mexico via Brooklyn.

Abel’s daughter cut my hair the other day: “Blade 1? Easy haircut.” And yet, she dedicated a plethora of blades, scissors and talc, a wealth of pleasant attention to my pate, my beard, my neck. She taped old style, elasticated tissue around my throat; a sharp, pleasant, wet straight razor gliding down the back of my neck. Her hand adjusted my head with a firm, woman’s touch. She was wearing a water-based cologne that opened a wound of nostalgia for Spain. In the background, heroes and heroines swooned on soap operas piped in via satellite from “el D.F.” (Say it Day F-Aay, bud.) I get a chill when Mexicans say, “Soy del D.F.”, in response to my inevitable, “¿de dónde eres?” / “where are you from?” The sound values of those sibilants contain something of the day-to-day heroism and chaotic aliveness of Latin America: it’s Buenos Aires, Montevideo, Cuzco, it’s Asunción; it’s Sao Paolo, and of course it’s the Distrito Federal. New York may be the shit, but the true motherlode, the big hearted Mother City, is “el D.F.“, homes. Mexico City, baby.