Waiting for Saint Brendan and Other Poems

It was a Saturday night, I think, some years ago, on one of those hated expeditions to the Upper East Side (my wife says it actually happened on the Upper West), where women carry lapdogs and wear high heels with their work out gear, and fashion still lives in an eternal Prep-land that brings back flashbacks of 1980s Connecticut. Anyway, there we were, long after midnight, making our way home to Brooklyn from a friend’s party, the soles of our shoes sticky from spilt Red Bull, hoping against hope to make the connection at Broadway Lafayette without too much trauma, when we witnessed one of New York’s prouder moments. Going down the stairs from soupy September air into a denser olfactory fug, I heard a voice say, “I’m taking a shit!” We turned the corner, and there she was: a woman in a skirt – probably under 30 – her face blurred with drunkenness and mirth, crouching on the stairs. The moment we saw her, a voice off-stage shouted:”where the hell are you?” And she replied, shouting louder, with gusto, as she stretched out the syllables: “I’m – TAKE-ing a SHITTTT!!!”

There are red leaves on the grass in Washington Square Park now. Squirrels run across the path, and climb the trees. Asian women – from the Philippines, I suspect – walk children that aren’t their own, in buggies; some kids are wheeled by their own parents. I don’t know if it was last night that I first smelled something like wood smoke in the air, and maybe it was only a wood-fired pizza oven, but it brought me back to Segovia, in 2001, when I went up to that retreat with Abel and Carmen (just some of the many people I’ve lost touch with) in a Carmelite Monastery in the mountains in the outskirts of town, sunlight flickering through the yellow sycamores along the river in the Castilian autumn, and I had the irrational urge to disappear into that sunlight, or that autumn, and stay there forever. (If to disappear means to live a “provincial” life).

Sometimes you have to leave the city, if only in your mind. I haven’t left the boroughs of Brooklyn and Manhattan in six weeks (“will I ever?” It’s already sucked me in). But I find my mind turning south across the latitudes, as I receive blog posts from Carsten, the New Zealander biker – ex air-force, who did a tour of duty in “the ‘ghan” as a liaison officer, and left it to travel, and potentially go into further studies in psychology – who I met in a hostel in Salta in the north-western Argentinian autumn (spring, in the northern hemisphere) as red leaves were falling, with a faint smell of wood smoke from all the Sunday afternoon barbecues…

I’ve been following his progress through Bolivia, Peru, Ecuador, up as far as Colombia, through Venezuela, the Guianas – described by one of their tourist boards as “Conradian”. Sounds amazing, and tropically dodgy. That was the time I’d come to the end of that particular road, dead-ending up against the Bolivian border at 15,000 feet, where cocoa leaves are chewed with bicarbonate of soda, bulging in men’s cheeks, and there are singing clubs where they sing ultra-romantic and macho lyrics like: “amor, I spread my poncho on your bed while you’re sleeping so that you’ll remember me.” Salta is a proud region where people have smooth, strong raven-black hair, and beautiful Andean features, twinned with Argentinian confidence. (Salta and Jujuy contribute disproportionately to the national police force, too, for whatever reason. Brings back “the king’s shilling”…)

Oh, I could have continued, but would have needed another kind of provisioning – to have rested, or been outwardly stronger, ready for more privations and altitude. Bolivia, with its salt flats, ochre and pink mountain colours was hard to resist, but I had to go home a month early to prepare for New York: there was a visa to get, an interview in the embassy fortress; there were family and friends to spend time with. It was the right decision. So, I stayed put in the hostel near the park by the bus station, and didn’t do much: slept a lot, walked a lot and read The Lord of the Rings in Spanish, ate well with my new friend, the wonderful Lola from Paris, who works between Buenos Aires and France producing films and fashion shoots. We went out for local beef and too much local red every night, then she left for BA again. I followed a week later, on one of those twenty-hour bus journeys that grant you the space and the time to think, and to settle again. The space of Argentina can itself feel like an inner territory. 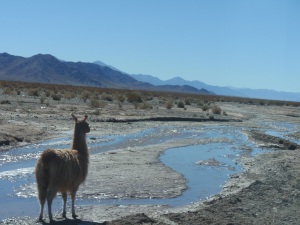 After another week in Buenos Aires with Lola and other friends, I was on my own way home, too. Our mutual Uruguayan friend, Martín, from Montevideo, in scarf, corduroy blazer, runners, shaved head and huge sunglasses, smoking an inevitable Marlboro red, saw me to my taxi while a waiter in a white jacket crossed traffic carrying a tray of café con leche to a favoured customer in a Hairdressers across the street. Martín kissed me on both cheeks, hugged me: “adios, Nene.” (“See you, kid.”) We’d known each other a week, and were already friends.

By the end, after three months, after conversations in Paraguay, Argentina and Uruguay with taxi drivers, artists, poets, journalists, house wives, back packers, bar men, prostitutes, beggars, old lefties who’d been exiled to Spain, Brazil, France, during the bad ’70s and ’80s, conversations with indigenous people on rickety buses, friends of friends who then became my friends, I felt I had a home at the end of the world. And, now, South America looms large: real, but still romantic in its gutsy reality. And, two seasons later, Carsten is still circling the continent on his motor bike: through Lima, Bogotá and, more dangerously, now, the lunacy of Caracas. I think of him when I’m in the crush of days that don’t always give much time for lateral thought, and of Lola, now on her way back to Buenos Aires. New York, they say, doesn’t lend itself to nostalgia. I don’t think that’s always true.

God speed, man. The mattress in the spare room (spare room in New York? Amazing, but true) is ready for you, when you’re passing through on your way to the next leg of your journey.

Went south from Washington Square, and found myself in a semi-pedestrianised cobblestoned heaven / hell of chi-chi restaurants. (Ah, so this is SoHo…) One was all terrace, with lunch time fashion types sunning themselves; that is, if potential eyes could constitute a sun. But there were almost no rubber-neckers, because all potential witnesses were themselves studiously checking their digital communicative equipment, checking their make up, or talking to a friend who was doing the very same.

The café I’d been looking for, Olive’s, recommended in the NFT for its amazing sandwiches, had a queue going out the door. (How much of their lunch break did people spend queuing for the perfect sandwich? It reminded me of something a young Hispanic architect had told me at 6 a.m. while tailgating at Bryan and Laura’s truck under a raised section of the Brooklyn Queens Expressway, after their gig at Union Pool in Williamsburg. He said that when you were making good money, when you’d worked so hard to get to where you had, finally, arrived, you thought nothing of queuing for half an hour at the restaurant that served the best ramen, Kobé steak, the latest sushi, “because you deserved it.” Though it sounded a tad like the L’Oréal worldview, I knew what he meant.) Nearby, office girls sat on window ledges with their legs crossed, drinking plastic cups of iced coffee, checking their text messages so as to appear occupied, and not be seen vulnerably eating alone on such strange perches three feet off the ground. Sporty women, slim, forty-ish, went by with baby strollers like designer tanks. The sight of babies in Manhattan had a touch of the alien about it: of a customised humanity, cyborgised – not by technology, but by money: the feeding tubes of sheer liquidity it took to raise children in this environment.

Women passed behind mirrored shades, in black mini-skirts and polished black leather boots; bangles and necklaces jangled on their perfect, barely-moving breasts. They had severe Cleopatra fringes, like designer biker chicks without bikes, as if they’d just come back from shopping for an identity. Guys in check shorts, thick-rimmed prescription glasses, and de rigeur pork pie-esque hats stood around talking, like nerds who’d suddenly discovered they were hip. A blond, tanned, muscular dude in a white vest and jeans walked past the restaurant. He was handsome enough to be a Calvin Klein model (and probably was) but no one noticed him. No one was looking at, or watching, any one else.

I went to look for a café somewhere else. Who knows, maybe in a year’s time I’ll be queuing for the perfect sandwich, but not yet.